MD Sleeps In Truck at Truckfest and Buys Two

After not getting much sleep on the first night of Truck Fest Mark jokingly said to JDS Trucks that he wished that he could sleep in a truck to get a better night’s sleep, the next thing Mark knew he was being handed a set of keys to a Renault T 380 (International Truck of the Year 2015). After a great nights sleep the Express Freight Solutions MD placed an order for two brand new T 380’s for the Long Haul transport operations at EFS.

The trucks have been sign written with the new style EFS branding and which marks the start of EFS’s 20th Anniversary in 2016. 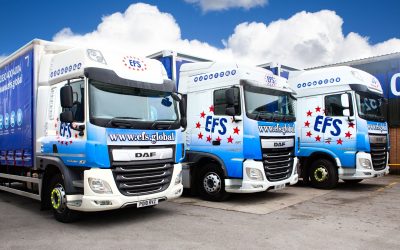 EFS Global are pleased to announce that we have  acquired Thomas Harwood & Son, for an undisclosed sum. Based in...

EFS Global is pleased to announce the acquisition of Courier Connections for an undisclosed figure, the deal which is...

EFS Global are pleased to announce the acquisition of Atherton-based Austin Wilkinson group for an undisclosed sum....